How to handle telemarketing twats

I’m a Telemarketer. Here’s How to Get Rid of Me

I’ve worked for a telemarketing company for two years and made a lot of unwanted calls. I have to keep making them because most people don’t know how to get rid of us, but the right approach can make all the difference.

Excellent advice for those of us (everyone?) who loathe telemarketers, direct from the irritating mouth of a telemarketer.  It involves a lot of self-control and firmness when dealing with them.  Talk about a challenge.  I have to admit to doing something that doesn’t really get me off their lists, but keeps them from reaching me regardless.  This only works with Android phones as far as I know.  First I set up a contact called Telemarketing Asshole.  Any known telemarketer/charity/etc. that keeps pestering me day after day gets its number added to this contact.  Then I just have my phone send any calls from Telemarketing Asshole directly to my voicemail.  I also set it to block any unlisted numbers, so good luck reaching me if you’re doing that… 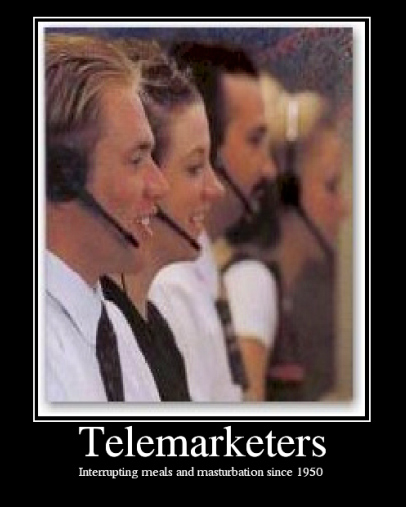 What part of “do not call” don’t you understand??

Jeremy sent this little tidbit along:  those slimy subhumans (a.k.a. telemarketers) are trying to render the Do Not Call List useless in many states, unleashing a nasty plague of dinnertime phone calls on the unsuspecting public.  Kinda like the plagues in the Bible, since telemarketers rank right up there with frogs and locusts.  The “existing business relationship” loophole mentioned in the story is their bullshitty way of weaseling out from under state laws.  I have visions of telemarketers partnering with credit card companies and banks in order to determine where you shop — then they’ll use it as an excuse to call you at home because you forged a “business relationship” when you bought that electric in-the-shell egg scrambler at K-Mart.  Oh, the possibilities are endless!

Telemarketers are toilet scum.  If the FCC caves on this, you may never have an uninterrupted dinnertime again!

Spank you very much!

Ha!  Take that, telemarketing scum.  Your complaint to the Supreme Court that the National Do-Not-Call List is “unconstitutional” and “limits free speech” has been rightfully flushed down the toilet.  Ka-pow!  Now, go back under the rock you crawled out from.

In May, three marketing groups, The American Teleservices Association, Mainstream Marketing Services, and TMG Marketing, appealed the lower court’s ruling. They argued that the Do Not Call Registry infringed upon their right to free speech, that it unfairly exempted political and charitable calls, that consumers already had less restrictive means to block unwanted calls, and that the imposition of fees on telemarketers represented an unfair tax on protected speech.

In their Petition to the Supreme Court, the marketing organizations argued that “this case arises from a recent trend among governmental entities to restrict commercial speech discriminatorily in the name of privacy.”

In February, the 10th Circuit Court of Appeals ruled that the Do Not Call Registry represented a valid commercial speech regulation because it advanced substantial government interests while being narrowly tailored and that the fees telemarketers must pay to access the list are allowable because they defray the cost of lawful government regulation.