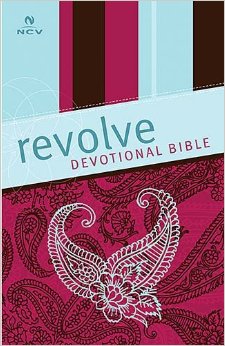 Behold the Revolve Devotional Bible for Girls.  This is something you can actually buy.  I’m sure it’s chock-full of helpful tips for Christian girls, such as:

Hmmm, maybe they should have called this the Devolve Devotional Bible…

Teen “werewolves” are the new mall-mopers

OK, I can deal with mopey goths, but this has GOT to be one of the dumbest things I’ve ever heard of. You have to watch the video, just give it at least one minute. Listen to what they’re saying, I dare you to keep a straight face… The narrator even uses the term “alpha dog” at one point. This is comedy gold!!

No, they’re not playing basketball like they used to in the ’80s. Today’s teen wolves, with names like Wolfy Blackheart, are hanging out in front of shopping malls and wearing weird contact lenses. One intrepid news team got the footage.

This is fascinating:  a guy in Wales has devised The Mosquito, which can be best described as teenager repellent.  Since older people don’t hear the higher frequencies that younger people do, this thing transmits a shrieking noise that only teenagers (or people under 20 or so) can hear, and apparently it’s irritating as hell.  He’s only tried it in one place:  at a local convenience store where, “…like birds perched on telephone wires, surly teenagers used to plant themselves on the railings just outside the door, smoking, drinking, shouting rude words at customers and making regular disruptive forays inside.”  They were also sometimes stole merchandise and attacked the staff.  But no more, thanks to this gadget which pushes them away and keeps them away.  Of course some people older than 30 can still hear it, but they’re not loitering in front of the store anyway.  I love the concept, though hopefully he’ll have it tested by audiologists before selling too many more.

Even more interesting is another teen-repelling method mentioned in this story:  the zit lamp.  This one “drive teenagers away by casting a blue light onto their spotty skin, accentuating any whiteheads and other blemishes.”  Now, that sounds like fun!  Talk about causing horror and panic amongst the young ‘uns…  Some of them probably look like the night sky under that thing.

Slate.com recently ran a fun little article about certain mindless, trashy teen publications.  I know they’re vacuous, empty-headed rags for equally empty heads, but after reading this, I almost want to read one just to appreciate what a trainwreck it must be!  (This is also why I enjoy painful things like bad cover songs and certain tacky, worthless movies. 🙂

Unless you’re a female seventh grader who considers The O.C. star Rachel Bilson a paragon of earthly perfection, J-14 probably isn’t part of your magazine-reading regimen. Nor should it be: There is little to recommend the publication, which revels in candid pictures of movie stars dislodging their wedgies and stories titled “My Crush Caught Me Taking a Dump!”

Nevertheless, J-14 is the No. 1 teen magazine on newsstands, where it sells more than 451,000 copies per month, 84,000 more than the venerable Seventeen. J-14 also beats out the industry’s crop of “little sister” magazines, among them Teen People, Teen Vogue, and ELLEgirl. The 6-year-old magazine’s success is even more impressive considering that these are otherwise dark days for teen magazines; last year, girls bought 1 million fewer teen magazines at the newsstand than they did in 2000, and longtime standard-bearers YM and Teen have both closed up shop. Why is J-14 flying off magazine racks while its competitors struggle?