Is it over yet?

It’s been a while since I’ve posted anything.  It’s not for lack of topics, exactly — I mean, there’s such a rich vein of conservative crazy out there to mined and enjoyed.

So what’s the problem?  Oh, nothing big…just the FUCKING SCARY TURN that America’s politics has taken lately.  The top Republican contenders:  a racist shit-nugget with a dead animal on his head and a weasel-faced fundamentalist nutjob loathed by even his own party.  And these people are getting massive support from right-wing voters at their violent, ignorant rallies.  Remember when the KKK endorsing a candidate used to turn people off?  These days it’s practically a selling point.

I don’t know how to process this anymore.  Can this really be happening?  I honestly don’t even care which Democrat becomes the candidate…I’m too worried about the jaw-dropping twattery coming from these ideologically toxic Republicans.  It shouldn’t surprise me that we’ve produced candidates like this, though.  George Carlin spelled this out ages ago:

This is the best we can do, folks.  This is what we have to offer.  It’s what our system produces:  garbage in, garbage out.  If you have selfish, ignorant citizens, you’re going to get selfish, ignorant leaders.  Term limits ain’t gonna do any good; you’re just gonna wind up with a brand new bunch of selfish, ignorant Americans.  So, maybe…maybe…maybe it’s not the politicians who suck.  Maybe somethin’ else sucks around here, like…the public.  Yeah.  The public sucks.  There’s a nice campaign slogan for somebody:  ‘The Public Sucks! Fuck Hope!'”

“Fuck hope”, indeed.  This election season is becoming such a source of anxiety and dread that when I feel the urge to write about something on the blog, I tend to dismiss it with a “Why bother?” sort of feeling.  Here’s how bad it is:  it took me a month just to figure out what I wanted to say on this post!

And how about that social media?  Talk about gasoline on a fire.  It’s become a wasteland of “So there!” political memes, endless shit-flinging, baiting “friends” into screaming matches, and uninformed hair-trigger outrage over anything and everything.  Reading the comments on just about any news story or YouTube video makes my blood boil.  What the fuck is wrong with people?  Are we really this terrible, or is it just therapeutic to spew your hatred in a public forum?  It’s got to be some kind of collective psychosis we’re experiencing here.

This is a particularly sore spot for me, because through social media, my brother and I managed to pretty much demolish our relationship.  Putting two stubborn brothers with vehemently opposing views/beliefs on Facebook is a recipe for disaster.  He’s a hard-line Christian Republican who thinks gay rights are a distraction from the “real issues”, and I’m a gay liberal atheist who thinks conservative Christian ideology has become a cancer on America’s politics…so you can see why we have the occasional blow-up, especially given that we’re both very outspoken.

Of course I can’t lay all the blame on social media for what’s happened between us, but he and I have never fought as much (or as intensely) as we do these days now that we have this thing that makes it soooo easy for people to vent their opinions in such an interconnected way.  It doesn’t even matter if we’re on or off Facebook — some extremely nasty things have been said on both sides, and it’s created a tension we can’t seem to get past.  It’s all so stupid…and for what?  I’ve made every effort to work around it, going to great lengths to avoid certain topics and engage with him in other things, only to have it blow up in my face yet again.  So I’m done trying.

Knowing that this crap is happening between people all over the county has caused me to step back from the usual amount of politics and social media in my daily life.  It just doesn’t seem worth it to keep absorbing so much negativity and outrage.  That shit’s for the younger folks.  I’ve also stopped reading so much news — instead of reading about Trump and Hillary, I read books and gadget blogs, play a few videogames, listen to podcasts…whatever.  It’s escapism, or maybe just avoidance, but it’s the only way I can keep from being constantly angry/depressed/disappointed about the growing number of emboldened extremist conservatives in this country.  And there are definitely more important things occupying my mind than reading about the latest turd to fall out of Trump’s mouth.

But that doesn’t mean I won’t eventually give in to the temptation and come back to kvetch…!

I love this so much it hurts

Anyone who’s been on Facebook long enough has run across one of those “Click ‘Like’ to send a prayer for this sick child!” posts. And people do it, as if clicking that button does anything at all…besides make you feel good about yourself, that is. 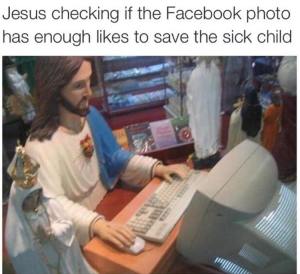 This service is pretty thorough. It’s scours your Facebook, Google+, and LinkedIn accounts for possible privacy and oversharing issues. They also have iOS and Android apps which are in some ways even more useful than the desktop one.