Would you like some cheese to go with that whine?

Oh, this is hiiiiii-larious!  Can’t you just hear the petulant whining in her voice?  It’s the sound of a vapid troglodyte who’s finally figuring out that her hateful views are not supported by all the American retail giants.  Because, apparently, it’s incredibly important for bigots to be able to shop in stores that support bigotry.  Whatever, lady.

Mission America’s Linda Harvey has penned her latest unseemly screed on WorldNetDaily, this time lamenting that Religious Right activists such as herself are running out of places to shop — because they’ve boycotted pro-LGBTQ businesses.

She writes:  “Well, it’s that time again — time to get out the Christmas list and start hitting the stores. The problem is — what stores? For any Christian who wants to spend hard-earned dollars with family-friendly, Christian-affirming retailers, restaurants and service providers, the list is growing shorter all the time.”

Well boo-fuckin’-hoo.  I guess you’ll be doing all your shopping at Hobby Lobby and Chick-Fil-A this year, hmmm?  Now get back to work!  Don’t you have a cross to burn somewhere?  And those Obama effigies can’t flog themselves, you know.  Priorities, people!

The uproar about Starbucks not being Christmassy enough for some people (due to the lack of snowflakes on their seasonal cups) is entertaining, but entirely ridiculous and a waste of time.  The 17-year-old twat who wrote the original article on that website for mouth-breathing conservative invertebrates (a.k.a. Breitbart) was obviously trolling for attention and outrage, and he got it by the truckload.  Come on…how can anyone possibly take this seriously?

WAR ON CHRISTMAS: STARBUCKS RED CUPS ARE EMBLEMATIC OF THE CHRISTIAN CULTURE CLEANSING OF THE WEST

“We’re embracing the simplicity and the quietness of it. It’s [a] more open way to usher in the holiday,” said their CEO.

You can see what’s going on here. More open? You mean, you’re trying not to “offend” anyone.  Frankly, the only thing that can redeem them from this whitewashing of Christmas is to print Bible verses on their cups next year.

The allegation that a lack of snowflakes on a cup is equal to throwing Jesus off a cliff is utterly ridiculous, of course, and from what I’ve been reading it seems that a lot of Christians agree that this whole Red Cup thing is a non-issue.  But we’ve gotten used to hearing unhinged screechings from Christians about this bullshit “war on Christmas” they’ve invented, and this one is juuuuust crazy enough to seem like a real complaint — and tons of liberal-minded folks are completely flipping out about it, sparking a barrage of retaliatory memes.  Well played, conservative troll-thing.  You know just how to push some peoples’ buttons.

Once again, Snopes comes to the rescue with some level-headedness:

It should also be noted that Starbucks could not have removed any overtly Christian symbols from their cups, because they never used them to begin with. Starbucks’ holiday cups typically feature general winter holiday symbols such as snowmen, carolers, and ornaments, which (although they may be associated with Christmas) are either secular in origin or not exclusively Christian.

Oh yeah, and Starbucks still sells Christmas cards and advent calendars in their stores.  So come on, people:  don’t feed the trolls, because you’re only feeding their egos.

Legal action?  Seriously?  So much for freedom of expression.  This guy’s right:  if this had been a traditional Nativity scene, nobody would have said a peep about it.  If you’re so offended by this that you feel the need to threaten someone, maybe you should take a moment to examine why that is.  Surely your faith and your religion is strong enough to withstand some satire…?  If not, you’re no better than the Muslims who flip their wigs when someone draws Mohammed.

But just days after WXIX spoke to Dixon, Sycamore Township township ordered him to take it down or face legal action. Town officials claimed that Dixon was breaking the rules with a structure on the front side of his yard, and a display that took up more than 35 percent of the area.

But Dixon said that he wasn’t buying the explanation. “I’ve lived here for 15 years and I’ve never had a violation of any kind,” he insisted. “It’s a holiday decoration. I know if it was a real pretty nativity scene they wouldn’t be saying anything.”

I just stumbled upon this excellent blog post about celebrating Christmas as a nonbeliever and making sense of the fictitious “war on Christmas” that we hear so much about every goddamn year.  I wish I could write something as compelling as this.  Maybe I could, if I had the patience. 🙂

That’s right, I didn’t say “happy holidays” or “seasons greetings” — I said “merry Christmas.” And yes, I’m an atheist, one who loves the Christmas season so much that I tend to get into the spirit of the holiday a little earlier than most. I love the decorations, the music, the gift-giving, the mythology — all of it. This often surprises people because I tend to have a dark sense of humor and an unsentimental, pragmatic worldview. But every December, you’ll find me singing along with Nat King Cole and Dean Martin as I decorate the tree; you’ll find me getting misty-eyed and sniffly when George Bailey comes to understand how many lives his mundane existence has touched and influenced; you’ll hear me wishing “merry Christmas” — and yes, sometimes “happy holidays” — to total strangers. And I’ll say it again — I’m an atheist.

Before I go any further, I want to make sure that word is clearly understood. There seem to be a lot of people who think an atheist is an angry, immoral person who eats babies and sodomizes house pets, and that simply isn’t the case.

via Atheist Oasis – A Rational Refuge

Even Santa bows before the military

This has to be the most utterly ridiculous Christmas photo I’ve seen in ages:  Santa Claus kneeling in front of a soldier’s gun with the American flag waving in the background.  What stinky cesspit of Photoshop hell did this spring from?

Yes, I get the main message:  our soldiers put their lives on the line and should be appreciated.  But bringing god into the mix takes it to a whole new level of crazy.  The group mentioned at the bottom are big on American exceptionalism — which they believe happens directly by the hand of god.  Yeah.  And, naturally, they hate Obama because that’s such a Christian thing to do nowadays.

The mind is a terrible thing…

Why in the bloody hell did I wake up this morning with “Jingle Bell Rock” in my head?  And a very specific version, even: the one by Hall and Oates . I haven’t heard that in many years.  I need to play some other music NOW to cleanse my brain palate…

Dull as dishwater, and then some

Today’s the office gift exchange, and I got stuck buying something for the most bland, boring, uncomfortably awkward guy in the office.  He’s so awkward that I want to claw my face off when he tries to make conversation…and, lucky me, I ususally get stuck sitting across from him when we all go out to lunch.  Nice guy, just so very dull!

So I got him a frilly bag with cutesy tissue paper for his gift.  Dunno why, it just seemed like a fun thing to do. 🙂

Every city needs a little Santarchy

I’ve never had the good fortune of witnessing a Santacon invasion, but next year I’ll be on my guard.  They were here in Seattle a few days ago, piling into restaurants and strip clubs before heading into the downtown library to fart around and cause mischief.

Earlier they Santafied San Francisco with a vengeance:

They were chanting “Ho, ho, ho!  Ho, ho, ho!” and by they, I mean about
200 people dressed in some version, and in many cases a perverse
version, of Santa Claus.  They were also playing dodge
ball, climbing trees, pounding beers, and generally inciting chaos.  The
defenseless Benjamin Franklin Memorial quickly became a victim of that
chaos when somebody wrote “HO” in white spray paint on the base (see
above photo), then climbed the monument and santafied it.

Actually it was spray-on snow which is harmless compared to spray paint, but you get the idea.  God, what fun that must have been.  The huggy elves (mentioned in the story) make it even more surreal.

Chuck Palahniuk wrote about taking part in one of these invasions in Stranger Than Fiction:  True Stories.  Many of the Santas he ran with liked to spramp each other in the mouth with spray bottles filled with vodka.  Now, that’s my kinda holiday spirit!

At KB Toys, they’re having a “Pre-Holiday Sale” (consumerist.com) just in time for Halloween!  In fact, they’ve sort of combined Xmas and Halloween into the same holiday altogether, like most stores (Target loves to do this as well).  Doesn’t that just make you want to puke up a lung?  I just LOVE the pumpkin wearing a Santa hat.  Also, notice the microscopic caveat “up to” on the ginormous “50% OFF” thing.  Those sneaky bastids. 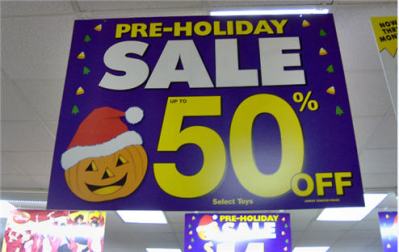 Well, here’s another Christmas!  We’re staying in Seattle again this year, it’s just too damned expensive to travel during the holidays anymore.  $600/ticket now vs. $200/ticket in early January makes it an easy decision.

Anyway, happy something-or-other to you and yours, etc.!