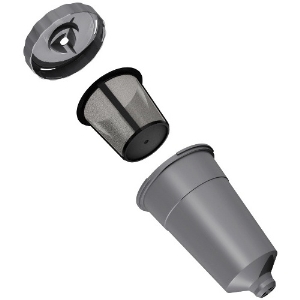 A while back I wrote a post about how those disposable (and non-recyclable) Keurig coffee cups are filling up our landfills with crap plastic.  So for the past couple of weeks we’ve stopped buying those K-Cups altogether.  Instead we used the reusable basket that came with the machine, which you can also buy separately.  It’s cheaper and we can use whatever coffee we like.

However, there’s a HUGE caveat:  the reusable basket makes very weak coffee, because it doesn’t have the same pressure system that a normal K-Cup has (which is what lets the coffee brew to full strength).  Keurig knows this, of course, because they want you to keep buying those K-Cups for more money than they’re worth.

Luckily there’s an easy solution!  Basically you cut the rip off the top of a used K-Cup, remove the filter inside, and insert it into the plastic piece that holds the reusable basket.  Then when you brew your coffee, it’s forced to brew for a short time before being squeezed through the tiny hole in the bottom, just like a real K-Cup.  Here’s a post on Instructables about it, with photos — it’s super easy and makes your coffee as strong as it should be!  We’ve been doing this for over a year, on and off, when we want our own coffee instead of the pre-packaged ones.  Now we’re doing it full-time and it’s great.

Another option I discovered today are these reusable plastic caps called My-Kaps, which go over the top of a used K-Cup, allowing you to refill the cup again and again, until the filter is worn out.

So if you’re tired of paying out the nose for K-Cups and contributing to a massive surge in non-recyclable plastic in the landfill, one of these options ought to do ya just fine.